The “Warrior Ethos” of Restructuring EW 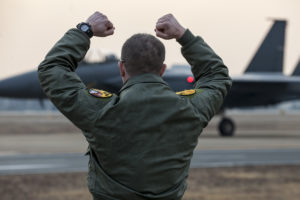 As the US Air Force restructures its electronic warfare (EW) efforts, its EW Enterprise Capabilities Collaboration Team (ECCT) continues to address prior complaints that the USAF’s EW mission/tools weren’t organized enough to stand up to our Cold War adversaries. As a result, the USAF will appoint an electromagnetic spectrum (EMS) expert or “champion” to its Air Staff – among other EW-related tactics. This priority shift is welcome, as we’ve experienced the industry’s lack of attention to EW since dB Control was founded nearly 30 years ago.

While talk of the ECCT’s plan may create a sense of urgency around EW for some, dB Control has always been active in the EW space – designing and manufacturing products that push the limits of power and bandwidth. Now that the USAF and others are crystallizing their EW tactics, this gives defense manufacturers like us even more room for innovation. In fact, we’ve noticed the insurgence and priority focus firsthand. Our design, engineering and assembly teams work tirelessly on products made specifically for demanding, next-gen EW applications. In fact, we just introduced two new rack-mount CW traveling wave tube amplifiers (TWTAs) with Ethernet interface for EW simulation.

Additionally, millimeter-wave high-power amplifiers (HPAs) are highly requested because they allow for faster exchange of data during tactical communication. Designed and tested for very harsh environments and altitudes up to 70,000 feet above sea level, these 26.5 to 40 GHz millimeter-wave HPAs are customizable to meet strict SWaP-C (size, weight, power, cost) requirements.

Under the new EW enterprise, the Air Force will also build education and training programs to cultivate an “EMS warrior ethos.” According to Master Sgt. Mitch Gettle, “the warrior ethos is the foundation of what it means to be an Airman. It is a hardiness of spirit, and moral and physical courage.” dB Control is honored to contribute to the technology behind this warrior ethos. Likewise, we echo ECCT team leader Brig. Gen. David Gaedecke, who said the next frontier of USAF EW capabilities means the Air Force will maintain “competitive advantage in EMS to achieve freedom of action while denying the adversary that same freedom. . .” Here’s to many more years of precision and innovation in the EW sector.