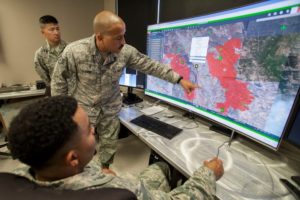 As the Carr and Mendocino wildfires raged this summer, the California Air National Guard used the MQ-9 Reaper unmanned aerial vehicle (UAV) to capture bird’s eye images and videos of the damage. The footage helped the California Department of Forestry and Fire Protection (CAL FIRE) analyze the leading edge of the flames, decide on the best containment measures and plan any necessary evacuations. CAL FIRE first used UAVs in 2013, when the MQ-1 Predator captured striking – and useful – video of the historic Rim Fire:

“We saw things over the course of that fire that you couldn’t have made up. I don’t think there’s a better intel resource at our disposal . . . It was like being blind and then having vision in the blink of an eye,” said Jeremy Salizzoni, a CAL FIRE technical specialist.

Five years later, the MQ-9 Reaper’s thermal imaging capabilities are giving firefighters and incident commanders even more invaluable vision and intel. Operating out of the 163d Attack Wing at March Air Reserve Base, the MQ-9 Reaper does what traditional aerial assets cannot – see through smoke, fuel, high altitude and more. There is a “specialized network to push and pull data from RPAs [remotely piloted aircraft]” to provide first responders with an easily accessible, near real-time framework needed to make tactical decisions.

While wildfires are in a much different category than military operations, tactical teams have the same objective – protect and save lives. Deploying UAVs during domestic disaster response missions requires a remarkable level of technical capability and reliability even in rugged air terrain. Precision is key, and the MQ-9 Reaper is like a well-oiled machine with many moving parts – one of which is the synthetic aperture radar system. The SAR system is what provides military commanders and first responders with the high-res images and footage needed to make mission-critical decisions. The accuracy of the images and video gathered by the MQ-9 Reaper is due in part to the traveling wave tube amplifier (TWTA), a critical underlying technology onboard the UAV. The TWTA helps power the SAR system and must be able to perform reliably under extremely harsh conditions at 50,000 feet in the air. 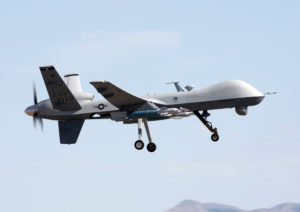 The high-power TWTAs used on MQ-9 Reapers are designed and manufactured right here at dB Control, where we consistently develop innovative products with TWT technology. In fact, we just debuted a new high-power, wideband, rack-mount TWTA with a 7.5 to 18 GHz frequency range. The dB-3911 TWTA was developed for demanding applications like antenna pattern/radar cross-section measurements, electronic countermeasures and electronic warfare simulation.

Without dB Control TWTAs, high-resolution SAR images of the wildfires would not be possible. We’re honored to be part of something much bigger than ourselves and we’ll continue to develop and manufacture next-gen TWTAs and microwave power amplifiers that boost a platform’s capabilities. Through our stringent manufacturing processes and harsh environmental tests, we can ensure the TWTAs onboard MQ-9 Reapers are ready for any mission, whether domestic or defense.