dB Control’s Vice President of Engineering, Jacob Thampan, passed away on December 20, 2021. We are collectively mourning the loss of a great colleague and friend. Jacob was – and will always be – an incredibly important part of the fabric of dB Control’s history. A link to Jacob’s obituary can be found here. Below are some tributes to Jacob, from a few of us at dB Control. 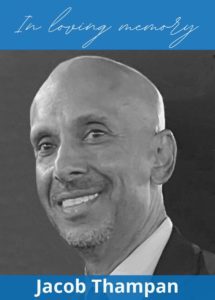 I first met Jake in the late 1980’s. I had been hired by ETM a company which manufactured large microwave tube test equipment. I was brought in to develop the capability to expand into the twt amplifier market. I was the new guy.

One day when I was walking down an ETM hallway a 220 + pound fat guy with an “afro” hair style purposely slammed into me knocking me into the wall. Then he laughed at me! I immediately wanted to know, who is this guy? They told me his name is Jake.

I was curious who this guy was. I found out that he was a good friend of my future (unknown at the time), business partner Peter Dahl and that he was a very smart and well respected technician. Jake was also known as a cocky and energetic guy who was very well liked. We became working friends.

As time went on I left ETM and Peter Dahl and I started dB Control in 1990. Several years passed. Jake had left ETM to return to College in Oregon where he graduated with a degree in electrical engineering.

When Jake returned to California I persuaded him to come work at dB Control. At that time dB Control was fairly small. About ten people working in a five thousand square foot building. We were a “rag tag” group of people with a work hard, play hard mentality. Jake fit right in!

Jake became my Engineering Technician. We worked side by side for many years. I found Jake to be very intelligent. But unlike many intelligent people I had known he was practical and gifted with common sense. Jake very quickly became my “right hand man”.

Over the years I watched Jake grow and transform. He cut his hair, lost his weight, learned to manage people and work with customers. He became a true professional. He was respected by dB Control and the industry as a whole. But one of the great things about Jake is that he did all this while always maintaining his likeable, energetic personality.

I met Jacob Thampan 5 ½ years ago when I interviewed with dB Control.  He was very quiet and did not say or ask much so I thought he didn’t like me.  I was so wrong as we became very close friends and Jacob, Steve Walley and I became an incredible travel team to visit customers to share the dB Control capabilities, technical and leading edge advantages in the high power amplifier as well as high and low voltage power supplies and he created great performance momentum for dB Control.

Jacob always introduced himself as engineering  vs his title of VP of Engineering and was always humble even-though he had knowledge off the top of his head on all the products from the beginning of the history of dB Control since his mentor and founder Joe Hajduk hired him in the early 1990’s.  Jacob was kind, friendly, knowledgeable and was so well liked by our customers and the family at dB Control.  His can do attitude and his ability to challenge his engineering team is the legacy he leaves behind in our minds, memories and also our hearts.

With his recent passing, we feel a void not only to our dB Control family but being felt by our valued customers.  His smile and happy memories will always be indelibly ingrained in the fabric of our minds and hearts.  We will all forever see and feel Jacob when we look at the products and walls at dB Control.  We will miss you but will never forget you Jacob!

After completing my undergrad in engineering, I was hired on to dB Control as a Project Engineer in 2008. During this time is when I started working with Jacob. At the time dB Control had about 50 employees. From the beginning I always looked up to him as he was the VP of Engineering and had great leadership traits. He had a way to communicate with the team and make us all feel like we were part of a great team. He brought energy into the workplace that was contagious.

Over the years the Engineering team led by Jacob, worked to develop new products to be installed into new or existing platforms. I had the privilege to travel and visit potential or existing customers with Jacob. His presence in the room was unmistaken as he had an answer for all technical questions, and if he didn’t, he assured our customers that he would get back to them with information. From these visits he would develop relationships with our customers. During trade shows we were always amazed by how many people he knew.

Jacob knowledge of our products and industry is unmatched. It is uncommon in today’s world to work for a company for more than a decade, whoever Jacob created a culture that resulted in a strong team with decades of experience. Jacob’s contribution to our niche industry is extraordinary and he will be missed by everyone that ever met him. Jacob has left this earth, but his legacy will continue though his deeds. Our deepest sympathies go out to the family of a great leader.