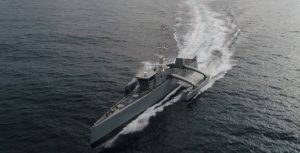 This new USV concept is part of the Navy’s goal to increase networking and interoperability of each of its ships. During future missions, large manned ships could act as passive command and control centers – while USVs could handle sensing and electronic warfare.

The first USVs to set sail will have military personnel onboard as an initial precaution. Both the Navy and the Coast Guard will need to build trust in these new ships since air and land have been the only hallmark venues of unmanned platforms.

“We’re going to design these things with the idea that we’re going to put people on them in the near term. Then maybe move toward fully unmanned when we think the technology and the understanding of how we will use them matures.”
– Rear Admiral Ronald A. Boxall, Chief of Naval Operations (N96)

This is a pivotal time in history for maritime operations because situational awareness, flexibility and control are becoming increasingly important when dealing with competing countries. And while USVs are an exciting development, they’re just one part of the Navy’s innovative tactical network. In fact, we’re working with a US-based prime system integrator on another Navy project. It’s our largest contract in the last decade. While exact details are classified, we’ll provide high-power, X-band, pulsed traveling wave tube amplifiers (TWTAs) for a shipboard program.

To ensure the TWTAs stay reliable while at sea even in the most rugged conditions, each one will undergo extensive environmental testing at our Silicon Valley facility. We’re one of the few OEMs and specialized contract manufacturers to have HALT/HASS machines onsite and a dedicated potting/encapsulation laboratory. So when products leave our facility, they’ve proven their reliability while meeting critical size, weight and power (SWaP) requirements.

Speaking of SWaP, those requirements will be even more stringent for the USV fleet as they consider the effects of payload on the mission profile. According to Rear Adm. Boxall: “We want everything to be only as big as it needs to be. You make it smaller and more distributable, given all dollars being about equal. And when I look at the force, I think: ‘Where can we use unmanned so that I can push it to a smaller platform?’”

According to Naval Sea Systems Command (NAVSEA), the Naval USVs will consist of:

As this new wave of unmanned vessels comes to life, we’ll continue our service on the manufacturing frontlines to help ensure smooth sailing for all the military operations we’re part of.